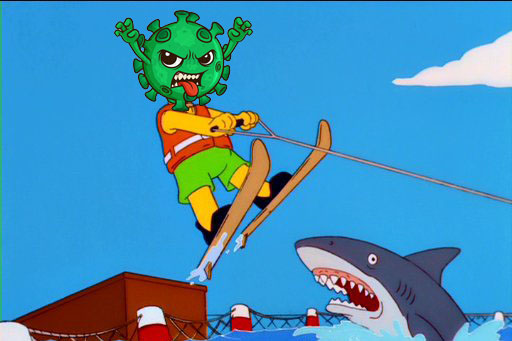 Has society finally reached the point where the coronavirus hysteria has jumped the shark? Bobby and Jordan postulate on whether or not the tide of public sentiment is about to turn.

Referenced in this episode:

“We always quarantine the sick … not the healthy. “, “… widespread infection similar to flu … I’m following the science. “, “… death rate less than the flu.”, “This is immunology and microbiology 101. Together we have 40 years of experience in this.”, “OK FINE… SHUT IT DOWN… BUT YOU HAVE TO ASK YOURSELF… WE’VE NEVER RESPONDED THIS WAY IN THE HISTORY OF THE COUNTRY. WHY ARE WE DOING IT NOW???”, “I don’t want to hide in my home and then develop a weak immune system… As soon as you hear the word ‘safe,’ that means control.”

The Emperor shivered, for he suspected they were right. But he thought, “This procession has got to go on.” So he walked more proudly than ever, as his noblemen held high the train that wasn’t there at all.

Quote of the utmost importance – Dodd to Griffin: “We are now at the year nineteen hundred and eight, which was the year that the Carnegie Foundation began operations. And, in that year, the trustees meeting, for the first time, raised a specific question, which they discussed throughout the balance of the year, in a very learned fashion. And the question is this: Is there any means known more effective than war, assuming you wish to alter the life of an entire people? And they conclude that, no more effective means to that end is known to humanity, than war. So then, in 1909, they raise the second question, and discuss it, namely, how do we involve the United States in a war?

Well, I doubt, at that time, if there was any subject more removed from the thinking of most of the People of this country, than its involvement in a war. There were intermittent shows in the Balkans, but I doubt very much if many people even knew where the Balkans were. And finally, they answer that question as follows: we must control the State Department.

And then, that very naturally raises the question of how do we do that? They answer it by saying, we must take over and control the diplomatic machinery of this country and, finally, they resolve to aim at that as an objective. Then, time passes, and we are eventually in a war, which would be World War I. At that time, they record on their minutes a shocking report in which they dispatch to President Wilson a telegram cautioning him to see that the war does not end too quickly. And finally, of course, the war is over.”

Will society accept the call to adventure? Or will we reject the call?

Lay not up for yourselves treasures upon earth, where moth and rust doth corrupt, and where thieves break through and steal: but lay up for yourselves treasures in heaven, where neither moth nor rust doth corrupt, and where thieves do not break through nor steal: For where your treasure is, there will your heart be also. The light of the body is the eye: if therefore thine eye be single, thy whole body shall be full of light. But if thine eye be evil, thy whole body shall be full of darkness. If therefore the light that is in thee be darkness, how great is that darkness! No man can serve two masters: for either he will hate the one, and love the other; or else he will hold to the one, and despise the other. Ye cannot serve God and mammon.